NEW! OPA APP
Beginning July 26, 2022, the Office of Public Accountability is undergoing installation of a new telephone system software. This transition will cause some downtime to our phone lines until the end of the week. All OPA employees can still be reached through their email addresses. If you are in need of contacting our office, please use the email directory located on our "Contact Us" page on our website.
Close (X)
Close (X)
Close (X)
Close (X)
Close (X)

Enter your email address to receive updates from OPA.

We care about your privacy and would never share your email address. You can unsubscribe by contacting OPA.

Home » About Us » Public Auditor

A Welcome Message from the Public Auditor of Guam

Hafa Adai and welcome to The Office of Public Accountability's Home Page. The people of Guam and the Government of Guam rely on this Office to serve as their guardian to ensure the effective and efficient administration and management of public funds and programs. This office will endeavor to provide independent, nonpartisan, accurate and timely assessments of the Government of Guam's financial and operating activities in accordance with generally accepted government auditing standards.

Our web site also offers links to other areas of the Government of Guam so that you may have access to other government resources and information.

I hope you find the results of our efforts useful and informative.

The Office of Public Accountability (OPA) has evolved significantly throughout the years since its creation in 1992. Formerly known as the Office of the Public Auditor, the new name emphasizes the work of the Public Auditor and the OPA staff. Then-Public Auditor Doris Flores Brooks recommended the name change in her 2009 inaugural remarks. In response, Senator Adolpho B. Palacios Sr. authored Public Law (P.L.) 30-27, mandating the change to reflect the expansion of OPA's duties and responsibilities over the years and to preserve its independence. But only the name changed. OPA’s motto, “Auditing for Better Government” and its mission to safeguard the public trust and improve government accountability, transparency, effectiveness and efficiency remains the same.

The position of Public Auditor was created in July 1992 by P.L. 21-122 as an instrumentality, independent of the executive, legislative and judicial branches of the Government of Guam. A five-member commission was tasked to recommend at least three candidates to the Governor of Guam for consideration. The first commission to appoint a Public Auditor consisted of Speaker Joe T. San Agustin and Minority Leader Antonio R. Unpingco of the 22nd Guam Legislature; Attorney Carlos Taitano, representing the Guam Bar Association; and John F. Phillips, CPA, representing both the Guam Society of CPA and the Territorial Board of Public Accountancy.
To qualify for the Public Auditor position, nominees had to be (1) a U.S. citizen, (2) Guam residents for at least five years, and (3) attorneys or Certified Public Accountants (CPA) admitted to practice in Guam. The appointed Public Auditor would serve a six-year term then face voters for a retention/rejection vote, in the same manner as judges.
In 1994, the commission recommended Attorney Robert G.P. Cruz to Governor Joseph F. Ada, who accepted the nomination and appointed Cruz as Public Auditor. Cruz was succeeded by Austin "Sonny" J. Shelton, who was appointed by Governor Carl T.C. Gutierrez in 1998.
In 1999, P.L. 25-42 repealed and reenacted Section 1903, Title 1, Chapter 19 of the Guam Code Annotated to provide for the election of a non-partisan Public Auditor to serve no more than two consecutive four-year terms coinciding with the election of village mayors. Public Auditor candidates cannot declare a political party affiliation or seek the endorsement of, or receive financial or material support from a political party. Additionally, Guam law expanded the qualification requirements to allow non-attorney or CPA candidates to run for office by having at least five years' experience in the formulation or enactment of government budgets.
The first historic election was set for the General Election of 2000 in November. Doris Flores Brooks became Guam’s first elected Public Auditor.
Guam’s Public Auditor continues to be the only elected position amongst the territories and island nations of the Pacific, where they have appointed Public Auditors or Auditor Generals. 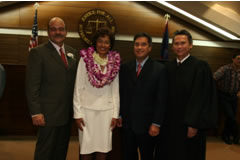 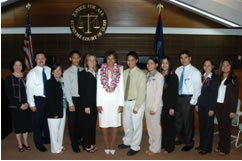 As a testament to the remarkable work she accomplished in her first four years in office, Doris Flores Brooks was handily reelected in 2004. Running unopposed, Doris Flores Brooks garnered 30,627 votes. She was sworn into office by Supreme Court Justice Philip Carbullido on January 3, 2005. In addition to her family, Governor Felix P. Camacho, Speaker Mark Forbes, several members of the 28th Guam Legislature and the OPA staff were in attendance.

During her first term as Public Auditor, the OPA established its fraud, waste and abuse hotline (47AUDIT; 472-8348). Hotline tips provided the genesis of a number of audits which contributed materially to the indictment of 14 government officials. Three entered into plea agreements and two were convicted at trial. Thirty-six audits were issued in her first term that cumulatively identified over $55 million (M) in misspent expenditures, lost revenue opportunities, and other financial impact. OPA monitored and provided oversight over the issuance of 68 financial audits whose findings included another $53M in questioned costs. A number of the findings in both the OPA reports and the contracted financial audits came from hotline tips.

In May 2004, the University of Guam (UOG) honored Doris with an honorary degree, Doctor of Humane Letters. UOG President Dr. Harold Allen stated “Doris Flores Brooks is and continuous to be a role model for the people of Guam in the area of public service, business and academia…The University is honoring Ms. Brooks with a Doctor of Humane Letters in recognition of her contributions to the island of Guam in the areas of public service, business and academia.”

As a result of this change in law, Doris Flores Brooks ran for a third term unopposed and garnered 28,767 votes. Public Auditor Brooks was inaugurated for a third term on January 5, 2009. She was sworn in by Chief Justice Robert J. Torres, Jr. in the presence of Governor Felix P. Camacho and Speaker Judith T. Won Pat.

After Public Auditor Brooks’s eight years in office and leadership, OPA’s dedicated staff of professionals issued 92 audits, which made 420 recommendations to improve government performance. These audits collectively identified over $117M in questioned costs, misspent expenditures, lost revenues and other financial impact. Several of the reports led to investigations, indictments, plea agreements and convictions.

In July 2008, the Government of Guam, for the first time issued its annual financial audit on time without qualification. Upon taking office in January 2001, Doris Flores Brooks found that only a handful of entities had unqualified or “clean” opinions and timely audits. Many were over two years behind and our government had a plethora of audit qualifications. It took eight years to achieve timely audits. This happened because of OPA’s continuous monitoring and oversight and ensuring government entities were individually and collectively held accountable under the leadership of Public Auditor Brooks.

In 2005, OPA was given the responsibility of Procurement Appeals by P.L. 28-68. This afforded vendors who were dissatisfied with procurement decisions made by government agencies to have an expedited administrative hearing rather than going to Court. The goal of this division continues to be to issue a decision within 90 to 120 days of filing. 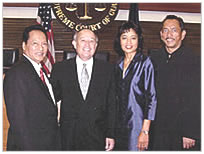 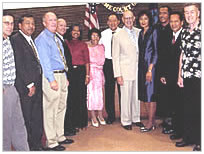 The Procurement Flow Chart is in progress. Please check back shortly.​